While he was still a teenager, Antonio Vasquez Yojcom got his father to pay for lessons from Pedro Rafael González Chavajay in nearby San Pedro. When he finished lessons and started out on his own, one of his first paintings was of a theme, childbirth, that Pedro Rafael had been working on while Antonio was apprenticing. In Maya communities, midwives were traditionally the person who delivered newborn. This was a theme that Antonio would return to again and again throughout his career.

Shortly after he started out on his own, he got married, and moved to a house near the market and on the road down to and from the lake. This was fortunate for Antonio because he was able to open a small gallery in a room in the house, and the location of the gallery meant that tourists to San Juan would most certainly pass by. He painted the side of the building with a mural. For many years his was the only gallery on the road down to the lake.

Having his own gallery meant that he did not have to sell his paintings at a reduced price to the galleries in Santiago Atitlán. Antonio struggled but somehow, he was able to support his growing family with the sales of paintings. 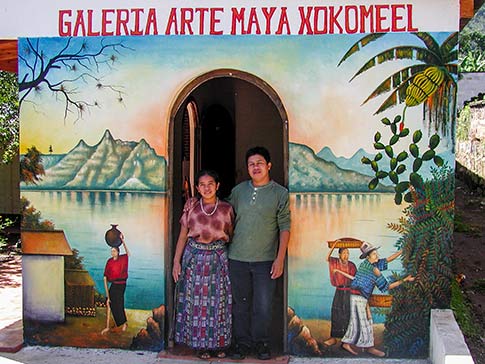 Antonio Vasquez Yojcom with his wife in front of his studio/gallery which was clearly visible to passing tourists. If I recall correctly, he was the first to paint a mural on his gallery. This photo was taken in 2000. Xokomeel is the Maya word for the afternoon winds that pick up arround Lake Atitlán.

Antonio’s most important paintings are paintings of Maya culture and traditions. To support his family, however, he branched out into paintings that would easily sell to tourists, such as quickly painted versions of Juan Fermin Gonzalez’s vista-de-pajaro paintings, and the Maya cubist paintings of Julian Coché Mendoza. This is the compromise that Maya artists usually must make when they decide to be full time painters. The artists such as Pedro Rafael González Chavajay, Paula Nicho Cúmez, and Chema Cox who have not compromised their art to sell to tourists, all have other sources of income.

Antonio is a survivor. Against the odds he has been able to succeed at making a living through painting. His oldest son has followed in his father’s footsteps and has become an artist. He has his own unique style, influenced by the breakthrough from the traditional genre that Julian Coché initiated. 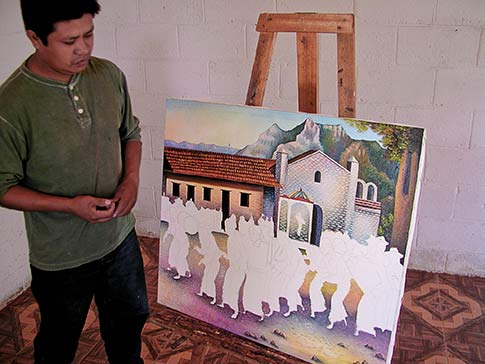 Antonio Vasquez Yojcom stands beside a work in progress. The scene is a procession, probably for the feast of San Juan the patron saint of San Juan la Laguna. The church and mountains surrounding San Juan are the background. The church underwent several years where it was being rebuilt much larger than before. Only the old facade was retained.